This is a copy of an original post made by me for my previous employer. It was written on November 28, 2013. The original link is here.

For a customer we’re creating a Windows 7 environment, using App-V 5.0 SP1 for application virtualization. We installed an English Windows with a Dutch MUI pack. All client types are installed unattended, including the App-V sequencer. We experienced a problem with the App-V sequencer which was caused by the MUI language pack.

After the installation of the new sequencer everything seemed to work fine. That is until I made the first package on the machine. The moment I clicked Save, an error popped up saying that the MSI couldn’t be generated.

This also resulted, as was to be expected, in an incomplete package folder. A report.xml and the MSI were missing.

As hinted by the error message, I looked in the Event Viewer. The log can be found in Applications and Services Logs / Microsoft / AppV / Sequencer. 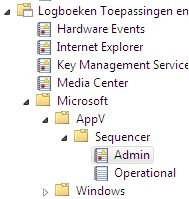 I opened the error with Event ID 5013 to view its details. 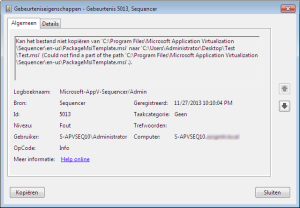 The error is, of course, in Dutch due to the Dutch MUI being installed through MDT. A part of the path couldn’t be found. I opened up Explorer and navigated to C:\Program Files\Microsoft Application Virtualization\Sequencer. Upon arrival I immediately noticed there was no EN-US folder, only a nl-nl folder.

Knowing that the solution had to be in some sort of language setting, I decided to explore the language options of the appv_sequencer_setup.exe. This Technet article however shows that there no options to set the language while doing an unattended installation. The/LAYOUT parameter however caught my eye. “It also extracts the Windows Installer (.msi) and script files to a folder without installing App-V 5.0.” Interesting.

Having saved the setup file to C:\temp, I opened up a command prompt and entered

Of course they had to be somewhere and there they are; the language packs. Simply double clicking them would have been too easy though.

So I opened up a command prompt and, in my case, typed

Replace XXXX with the language code (i.e.. enus) and BB for the OS bit version (32-bit=86, 64-bit=64) for the version you want to use. Pressing Enter resulted in the installation of the English 32-bit Language Pack.

After building a new package, or editing an old package, and choosing File / Save, the error no longer occurred. I checked the package folder and there I found a report.xml and a Test.msi available.